L1 and L2 as Loss Function and Regularization

Missing completely at random (MCAR) is the only missing data mechanism that can actually be verified. Missing data are MCAR when the probability of missing data on a variable is unrelated to any other measured variable and is unrelated to the variable with missing values itself. In other words the missingness on the variable is completely unsystematic. For example when data are missing for respondents for which their questionnaire was lost in the mail. This assumption can be tested by separating the missing and the complete cases and examine the group characteristics. If characteristics are not equal for both groups, the MCAR assumption does not hold.

Missing Not at Random

Data are missing not at random (MNAR) when the missing values on a variable are related to the values of that variable itself, even after controlling for other variables. For example, when data are missing on IQ and only the people with low IQ values have missing observations for this variable. A problem with the MNAR mechanism is that it is impossible to verify that scores are MNAR without knowing the missing values. 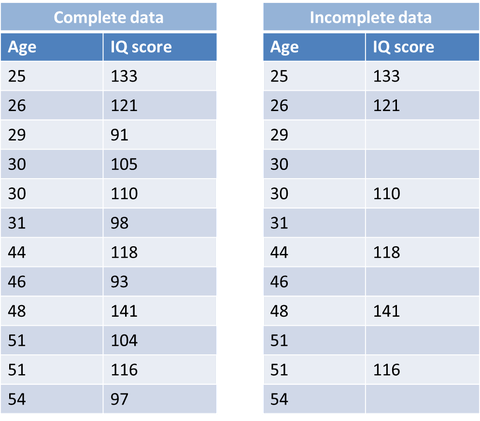 Walkthrough of an exploratory analysis for classification problems